So don’t ask me why It’s taken so long to tell you all about the visit to one of the coolest places ever but that is exactly what happened didn’t it?  ooops

Anyway, on the 14th July me and three of my friends (Joanne is a fellow blogger, take a look!) decided to go visit the wonderful world of Harry Potter at their Warner Brother’s studio. For those of you who don’t know I am a Harry Potter fanatic. I have all the books, all the films and have watched and read them all a gazillion times. (Okay, that isn’t a real number but you get the jist) 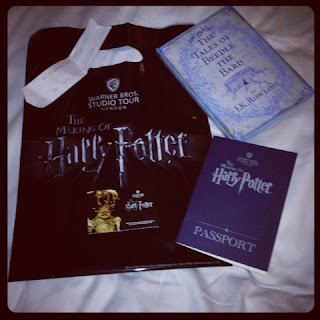 I don’t think we actually thought it would be as amazing as it was. There was so much of it to see! We expected to be done in like 2 hours but it was brushing on three hours before we even thought we were near finishing and that was only because we were going to miss our bus. We took pictures of everything! So much so that my phone and camera died whilst I was halfway through. I would put the pictures up but I don’t want to spoil it for anyone who hasn’t been yet so I won’t put any of the big one’s up.

The tour started in with a introduction about the films and what we were going to see. For those of you who don’t know Warner Brothers decided to open up tours (One here in London and the other in America) to the Harry Potter sets. Explain how things happened, who designed what, the thought that went in to making these tremendous films. It really was incredible.

The first big thing that the tour starts with is the Great Hall (Which is one of my favorite rooms) You then get to the other parts of set, like the costume, the Weasley’s front room, Hogwarts dormitories, the wands, the little props. We also go to see things like brooms, Pivet Drive, real life Butterbeer, the baby Voldemort just to name a few. The tour ends with a gigantic beautiful Hogwart’s ‘through the seasons’ model. There is a gift shop after it too which is great but some of the things are expensive so maybe save a bit before you go. I got the book The tales of beedle the bard which I didn’t have!

What I loved about it was the personal touches of the tour, there were quotes everywhere from costume designers to graphic designers and what it meant to them to work on such a fantastic project. That and the fact that you actually get to see how long it took to make the sets and the effort they went to in making the films. Some of them took years. You can definately see why the films became an incredible success!

If you like Harry Potter, you will not be disappointed!

9 years ago by naffy
Love Share 1
< Prev post
Vlog Takeover So recently, I started using my YouTube channel a bit more. By that I mean subscribe to a lot more stuff. It’s basically what I use YouTube for. I casually...
No good role models for girls?! Due to the notion that we live in a ‘Celebrity Culture’ you would be forgiven to think people believe there are no good role models for young girls. Role models...
Next post >

What’s in my bag

Hi lovelies, I have been wanting to do one of these posts for the longest time. I love reading them as I find it interesting (In other words I am...

So this year has seen many happy occasions and it’s not even over yet! I know a lot of bad things take place everyday across the world and even in...

50 random facts about me tag

I saw this tag around the blogsphere and I really enjoy reading them so I thought I would do a version of it I am quite a happy person 70%...