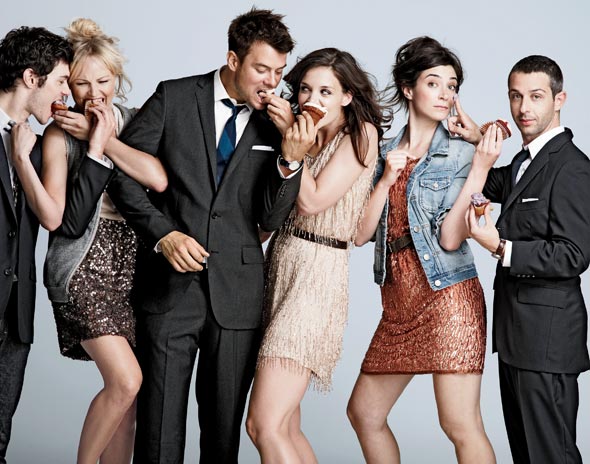 Yes, I know this film is two years old. It’s been on my list but I never got around to watching it. Lo and behold what happened?! I came across it on the movie channel. I mean have you seen the cast? The film features Elijah Wood, Adam Brody, Katie Holmes, Josh Duhamel and a young Diana Agron how could i not watch it?! I knew I was not going to be disappointed. Guess what? I wasn’t.

The film centers around a group of friends who met while they were at university and got the nickname The Romantics after the historic era. (Which by the way is what intrigued me to the film in the first place) They get together after a few years in the real world. They get together for a wedding and inevitably brings the baggage that close friendships can bring.  The relationships that changed over time, who hooked up with who, where they are in life ect ect. Add in the mix of an intense love triangle involving Josh Duhmel and Katie Holmes characters (One of them is suppose to get married) Staying true to the name The Romantics there is music, passages and scenery from this era (most of the film is shot in the wonderful country side)
The acting is great as I mentioned the cast. Personally, I think they were all good for the role even Elijah Wood who took on the role with a bad boy edgeyness.
The film is based on a book written by Galt Niederhoffer which I have just added to my already long lisst of books to read :).
Here’s the trailer, enjoy

9 years ago by naffy
Love Share 10
< Prev post
“Me, ready for the real world? You have to be kidding” For those of you that know me know that I rarely complained when I was at school. I was a goody toe shoes not going to deny that. I genuinely...
Song of the week! Bethany Joy – Someone to watch over me Those of you who watch One Tree Hill will know who Bethany Joy is but for those of you who don’t know...
Next post > So I went to watch this with one my friends at uni last night and I tell you something I was not expecting the film to be as funny and... So, i finally got around to going to watch The Hunger Games. I had been wanting to go watch the film since it came out so needless to say i...